'Hawks Heating Up In Chi-Town

For years, the Blackhawks have been the only NHL team not to televise their home games, for fear of cannibalizing ticket sales. But owner Bill Wirtz passed away a few weeks ago, and now his son Rocky is the new sheriff in town. So starting this Sunday, 'Hawks fans will be able to see home games on TV, and for the first time in years, the Blackhawks look like a good young hockey team, based on what I saw Friday night at the United Center.

18 year-old Patrick Kane scored a beautiful goal, weaving between the Blues defensemen and snapping off a quick wrist shot that surprised Manny Legace, who didn't get his glove up in time. I was hoping to see former Lightning goalie Nikolai Khabibulin in net, but no luck, no Khabby, as the Hawks stuck with Patrick Lalime and beat the St. Louis Blues 4-2.

My girlfriend Heather flew up to join me in Chicago, and I figured we'd better do something touristy, so we took the Blue Line train in from O'Hare Airport and rode up to the top of the Sears Tower just so we could say we'd seen all of Chicago!

We then grabbed a cab and headed over to the game. Looking at the map, I expected that the United Center would be in a hustling, bustling part of Chicago with bars and restaurants nearby. No such luck. Just parking lots, apartments and vacant lots surround the building, so we headed inside early.

The United Center certainly has the best selection of food so far. I stuck with the Chicago-style Vienna Beef hot dogs, but there were grilled salmon sandwiches, quesadillas, pulled pork, salads and countless other choices. I tried the local Goose Island beer, which was really good, and I must admit I exceeded my two beer limit! It was a lively crowd announced at 16,000+, which seemed about right, unlike many venues in which the announced attendance seems way higher than the number of butts in seats.

So are you wondering if I won my free round-trip tickets on United Airlines? Well the team left out one little detail, instead of just shooting on net, I had to hit a six-inch hole in the middle of the goal, shooting from the center red line. They even gave me a Patrick Kane jersey to wear, hoping some of his skill might rub off on me. I had three tries, and my first shot was wide right, the second wide left. My third shot looked good when it left my stick, but missed by a few inches. There were two other contestants, a radio DJ and the ever-present hot girl in high heeled boots. She's the one who came closest when her first shot was right on target but stopped a foot short of the net. No free tickets for me, just a t-shirt as a parting gift! 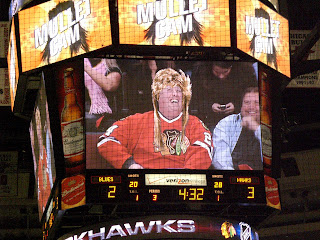 We all remember Wayne and Garth playing street hockey in their Blackhawks jerseys in Wayne's World, right? My Oscar for best Jumbotron stunt goes to the Blackhawks for - the Mullet Cam! The arena camera catches unsuspecting fans and superimposes a classic 80's mullet over their head. Maybe it was that third Goose Island kicking in, but I thought it was hilarious. Heather, not so much.

I'm halfway into 30 Games In 30 Nights and so far, so good! The weather has been perfect, and I haven't missed a plane or gotten lost (too badly, anyway) getting to a game. Most importantly, I've met hundreds of supportive hockey fans who have wished me well, and shared their own hockey stories with me.

I'm in Washington to see the Lightning take on the Capitals tonight for Game #16, then flying off to Colorado in the morning. Unfortunately, I didn't get to use those free United tickets!
Posted by Steve Williamson at 1:11 PM

How was the national anthem? I've heard Chicago fans go nuts during the anthem. It's great to hear that their home games are finally on TV.

Don't jinx yourself! No more talk about the perfect weather and on-time flights. Save it until the end.

As a Chicago fan I can say the Anthem has lost it's luster lately. Since a child, I've remembered every fan in The Stadium on his/her feet applauding for the entire song. Visiting fans, wearing out-of-town sweaters, usually look around with their arms crossed in confusion. Wayne Messmer would belt out the anthem with Frank Pellico pounding on the Stadium's Organ. The often told "Roar" of the old stadium is no myth.

I encourage any visitors to the UC to stand and cheer during the anthem, it's not disrespectful, simply tradition.