Rick Nash is no Sandra Bullock, but my visit to Columbus was one of the best so far. and everyone I met was friendly and welcoming. The only people to disagree would be Paul Kariya and the rest of the St. Louis Blues, as they lost 3-0 to the Blue Jackets.

Nationwide Arena was the quietest arena I've visited, and it was fascinating to hear the players communicate on the ice. Manny Malholtra scored the first goal with a beautiful top corner shot and that's all Pascal Leclaire needed as he notched his fifth shutout. That makes shutouts in three of the last four games I've seen.

After the game, I stopped by the R Bar, outside the arena and hung out with the Blue Jackets fans who had invited me. There's nothing like a great hockey bar, and with the late afternoon game ending by eight o'clock, I had some rare time to spare. I downed a couple of Molson Canadians before heading back to the Holiday Inn, where I promptly fell asleep before my computer even booted up! Take a look at my remaining cities on my schedule and let me know if there is a great hockey bar in your town.

I've been to ten games so far, and have enjoyed the view from different seats. In Montreal I was five rows from the roof of the Bell Centre, in Phoenix I was just seven rows off the ice and on Long Island I was right behind the goal.

Add one more view to that list, as Russ Mollohan from the Blue Jackets invited me to watch the game in the team's luxury suite. There was no shrimp or champagne, but I did feast on some wine and cheese (not that there's anything wrong with that!) as I sat back in the comfy chair overlooking the ice. I wouldn't want to sit in a suite for every game, but as I wrapped up the first third of 30 Games In 30 Nights, I wasn't complaining! 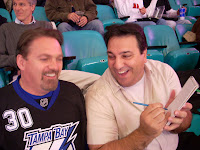 At Madison Square Garden last week, I sat with Vinnie Mallozzi from the New York Times, and he wrote a nice story in today's paper about my 30 Games In 30 Nights trip. Thanks Vinnie Here's the link

Tom Hoffarth from the L.A. Daily News and Damian Cristodero from the St. Pete Times also wrote stories on Sunday. I'm excited that other people seem to enjoy reading about this trip!

I have to wrap up now, as they've just announced the final boarding call for my flight down to Fort Lauderdale. Tonight the Lightning take on the Florida Panthers down in Sunrise and I'm taking my son Nik, his girlfriend Tara and her Dad to the game. It's my first time meeting her Dad, but if he's a hockey fan, we'll get along well!

When you get to Buffalo, you're not going to want to miss the Pearl Street Grill & Brewery. The place brews several different varieties of beer, and is always chock full of Sabre faithful. Good luck on the rest of your journey!

your storys are very interesting, I've always been a hockeye fan, 1st Red Wings now Blue Jackets fan. Psl from the beginning section 209 where the old Chill fans set. I am an sheet metal worker and was involved in the erection of Nationwide Arena. so im curious of your ranking the arenas when you have completed your journey. If your ever back this way drop me a line and have a few brews with me and some sheet metal worker brothers. peace out

Steve, I just read the interview with you on ESPN and was at that Blue Jackets game. Glad you had a good time at Nationwide...and you got your own jersey? Congeniality indeed.