From the Cold Coliseum to a Hot Night in Dallas

Did I tell you how cold it was in the Nassau Coliseum? Any of you who've ever played hockey, or had to get up at 5am to take your kid to hockey practice know how cold a hockey rink is. Sitting 12 rows behind the goal in Long Island brought back the feel of a game at your local rink. The noise when the puck hit the boards wasn't muffled, like in most new arenas, but echoed throughout the building, and the first row of seats wasn't right up against the glass, but set back about six feet. Dare I call Nassau Coliseum the Wrigley Field of the NHL? Not quite, but it felt like a building made for hockey, unlike some of the newer arenas.

Props to the fans in Section 330 high up in the corner, they were the loudest, happiest bunch I've come across so far. Saw lots of kids at the game, and Sparky the Islanders mascot kept them entertained. In New Jersey, when there was a stoppage in play, three guys dressed in baggy tracksuits shoveled up the snow from around the goaltenders, while on the Island, three gorgeous girls performed the task, with Farrah Fawcett hair from the 70's, big smiles and one even threw an axel in there in case the Ice Capades talent scout was in the stands watching. Way better than the ice girls in Anaheim, too. 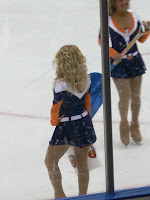 Even the hot dogs were throwbacks, served in plain brown boxes with Gulden's brown mustard, just like they used to at Madison Square Garden. I was an unhappy pup when I couldn't get Gulden's at the Garden on Monday. Score 9 out of 10 for my Nassau Coliseum experience!

I was up early this morning to catch my plane to Dallas, and connected through Philly with no problems. I've been getting a lot of calls for interviews and such, which kept me busy this afternoon. I'll probably add a section on www.30GamesIn30Nights.com with a few of the press links over the weekend.

I'm off to the American Airlines arena now, where the Stars' Mike Modano needs just two assists to the set the all time record for assists by a U.S. born player, which should get the crowd buzzing. Game on!
Posted by Steve Williamson at 6:21 PM

Glad you had a great experience in the Coliseum. There really is no better place to watch hockey. Even with the 2/3rds full last night, you get the feeling of how loud it really can be. And it's definitely by far one of coldest building in the league.

I am really enjoying your blog, it is nice to see a true fans perspective of the Coliseum when it is bashed all to often by the non-hockey fan media. I really hope you get to experiance the Coliseum again during a playoff game, Isles-Rangers game, or any game when the place is packed to the rafters. In my opinion, there is no better place to watch a hockey game. Keep up the great work!!