Perhaps they were just unemployed actors auditioning to be extras for Slap Shot 3, but I was impressed with the crowd at the Staples Center tonight for the Kings/Oilers tilt. Not the quantity of them, but their quality. These guys knew their hockey, had a sense of history, and even broke out an "Oilers Suck" chant. Who knew?

Heidi from LAKings.com interviewed me tonight and asked who I would be cheering for throughout my trip. I replied, "Always the home team". And isn't that the way it should be in pro sports? The home team should always win, and the fans will always go home happy, like they did tonight.

The home team Kings won 4-1 in a sloppy show in which neither team brought their "A" aame. No checking, pucks jumping over sticks, d-men hanging back instead of pinching in. But there's a pot of gold at the end of every rainbow and Patrick O'Sullivan scored a sensational blind rebound goal with his back to the net late in the third period. I remember how he slipped down the NHL draft a few years ago because of a bad attitude. Having two teenagers of my own, I can vouch for the fact that at age 17, all boys can have bad attitudes. Tonight, O'Sullivan had two goals and looked like the best player on the ice from my perch.

I sat in the first row of the 300 level right at center ice, perched directly behind the TV and radio crews for both teams. A great place to watch the game from, as you can see from the picture. Funny seeing the Kings broadcast team spending much of the night watching the World Series game on their TV monitors, and the Oilers announcers lobbing balls of electrical tape over the partition at each other. 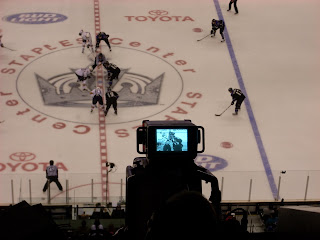 Tonight's line of the night may have crossed the line....An Oiler took an errant skate blade to the face and was down on the ice when a fan yelled, "Hey #13, your face may be hurting you, but looking at it is killing me!" Did you have to be there for that one, too?

L.A. isn't Hockeytown, but I walked away impressed with the Staples Center, which is is filled with fan-friendly elements on all six levels. The PA Announcer even gave the score of the Manchester Monarchs (Kings AHL farm team) game along with the NHL scores. A nice touch.

I haven't felt too tired yet, but did sleep like a baby for four hours on my flight from Detroit. Yes, the City Of Angels was hazy as usual. Tomorrow is the last day I can sleep in for a while, as I only have to make it to Anaheim. Although L.A. is the only city where you can get stuck in a traffic jam on the freeway 24 hours a day.

Quack Quack, off to see the Ducks!
Posted by Steve Williamson at 1:59 AM

Well glad you are enjoying it!!!
Shirt looks good....

Glad our Kings gave you a good show!

30 Games in 30 nights? Can it be done? What a fantastic concept and I'm just soooo jealous about 30 nights of games and hometown beers!

Love it, please keep it up

Did you notice that this is the only game that you'll be at which was aired on Hockey Night in Canada?

teve, Wow, not only did I meet you after the game but we sat in the same row duing the game. Hope we can talk soon and hope the trip goes well. I'm enjoying reading all about it.
-Eddie (puckpodcast.com)