How's That For A View In The Igloo? 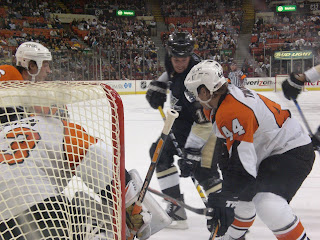 Imagine watching Sidney Crosby skating down the ice at eye-level, splitting the defenders and letting go a wrister that just misses the net and hits the glass right in front of your eyes. Imagine seeing 230-pound Georges Laraque make a beeline for the puck-carrying defenseman rounding the back of his own net, then loudly slamming him against the boards, which shake with the ferocity of the hit, just inches away from you.

Tonight at the The Igloo in Pittsburgh, I didn't have to imagine, because those plays happened right in front of me! For the first (and probably last) time in my life, I sat in the perfect seat, in the front row on the glass, right next to the goal judge behind the net.

Hockey fans are the greatest people in the world, and tonight I was the guest of one of those people. Joe Tomon is one of the foremost dealers of game worn hockey jerseys, the real jerseys players wear in the games. I knew Joe by reputation, but had never met him before tonight. Joe contacted me last week and asked me if I would join him for the game, and I happily accepted his invitation. He picked me up at my hotel and we drove into downtown Pittsburgh. Joe has been a Penguins season ticket holder since 1974 and we sat in his two seats, right on the glass.

I learned from Joe that the arena was originally built back in 1961 to house the Pittsburgh Civic Light Opera Company. We chatted about game worn jerseys and he told me that the Penguins jerseys from 1967-68, their first season, were stored under the opera stage and not discovered until years later, by which time they had become mildewy and were thrown away. The few that survived are now worth thousands of dollars. And we talked about our kids, Joe's daughter sweet-talking the curator at the Hockey Hall Of Fame into unscrewing the protective glass so she could hold the Stanley Cup all by herself. In an interview yesterday, I was asked who is the most memorable person you've met on this trip and I didn't have a good answer. Today, I have that answer. Joe Tomon. Thanks for being the ultimate hockey host!

The Flyers scored 30 seconds into the game and added a second goal a few minutes later on their way to a 3-1 victory. Crosby and the rest of the Pens skated hard, cycling the puck more than any team except the Lightning, but Martin Biron had the hot glove in net for the Flyers. Lowlight of the night, Flyers' six million dollar man Daniel Briere somehow sterring a tap-in wide from two feet in front of the net.

The Mellon Arena is the oldest arena in the league, but I loved it. The concourse seems to zig and zag all over the place, but there were no long lines for liquids, incoming or outgoing, if you know what I mean! I was surprised to see only a handful of Flyers fans in the stadium, and with the (mostly) good-natured abuse they were getting from the Pens faithful, I can understand why they stayed home!

From our seats, we could clearly see the expressions on the players faces that you can't see from even a few rows further back. With Sidney Crosby's babyface, he looks like he should still be playing peewee hockey. I hope rugged defenseman Jason Smith is already married, because his face is so beaten up from 15 NHL seasons that I can't imagine any puck bunnies giving him a shot. But my favorite was Mike Richards, who was smiling and laughing through most of the game. At one point, he slashed a Penguin who gave him a dirty look and a jab with the stick. Richards started cracking up, then patted the guy on the back and within seconds they looked like two old buddies watching a Will Ferrell movie together.

My favorite Will Ferrell movie is Old School, and as I tour these arenas, I realize I have a soft spot for the old school buildings like The Igloo. It will be torn down in a couple of years, replaced by a new cookie-cutter arena with great sightlines and all the comforts of home, but lacking in history.

Off to Beantown next, where I'll be going to the Bruins game with my Boston buddy, Mike Lee, assuming we can round up a pair of tickets tomorrow! 13 down, 17 to go!
Posted by Steve Williamson at 10:57 PM

wow that pic looks amazing, looks like some great seats! good to see that all the flights are working out for you, and that you are still having a good time, will definately continue to read the blog for the rest of the games...its almost as good as being there reading the blog, and i myself am hoping to atleast make it out west (canada) to see the awesome arenas out there by the end of the season, but i dont know if i could handle the rigourous 30 games in 30 nights, lol, thanks for the great read!

i'm sure you could find more interesting things to say and realise that the bolts will not even be in the playoffs this year. You're team is just not good enough.

What a great story. And lucky you! I also must say that I'm very impressed with how fast you get these blogs up. :)

Hope you enjoyed your brief stay in the Burgh & the Igloo...I sat behind you, albeit a lot higher, up in E-18...(caught you takin' pictures of 'The Wave' as it made it's way around the arena !!)...wish the Pens could've scored a bit more to show you how loud the old barn gets when they're playing well...hope you enjoy & have a safe rest of your 30 in 30

Congrats on your trip - thus far. You were all over the media here in Ottawa earlier this week (newspapers, local newscasts, during the game on TV), and you're the envy of every hockey fan I know.

I'm not sure if you've been there before, but be sure when you get to Toronto to set aside plenty of time for the Hockey Hall of Fame. Fortunately, it's only a five minute walk from the Air Canada Centre.

One thing that surprised me - at least on my most recent visit - was that the Stanley Cup was displayed on a pedestal, but not surrounded by glass or in a case. In fact, there was a small set of stairs behind it so fans could get up close - and dozens of fans did extactly that, having their picture taken with the cup. I certainly remember is being behind glass years ago, as your friend in Pittsburgh mentioned, but that certainly wasn't the case earlier this year.

Just remember that while you can touch the cup, the one thing you're not allowed to do is pick it up and raise it over your head - that honour, of couse, is reserved for Stanley Cup Champions.

TSN showed a closeup of you at one point and they were talking about your venture.

I'm glad you enjoyed your time in Pittsburgh, but if you're ever around again, we'll try and give you a more exciting game. That one was way too quiet. :)

glad u had fun.!
pittsburgh rocks!

our arena is crazy.

your idea is amazing.