I Am Not The Jinx

Before the Lightning vs Capitals game, I'd seen four Tampa Bay road games, and they had lost all of them. Then the Lightning played Carolina on the road, a game I didn't attend, which they won. Both hockey players and fans are superstitious by nature, and I was starting to think that maybe, just maybe, I was becoming a jinx. If I'm at the game, the Lightning lose, if I'm not there, they win! So I was nervous going into the Washington game, especially as some of the Lightning brass had invited me to sit with them at the game.

After two even periods, the Lightning scored two quick goals early in the third to take the lead, and when Ryan Craig made it 4-1 in his first game back from injury, I knew that it wasn't my fault that the Lightning had been so miserable on the road! The final score was 5-2, and the Lightning execs started talking to me again!

The refs made some bad calls and missed some obvious ones, but I realized that since my first game in Detroit, I'd hardly noticed the refs. That's a good thing. Seems to me that after a couple of years of inconsistent refereeing, the NHL has hit on the right balance of letting the skill players play, while still maintaining the flow of the game.

I spent a few minutes with Bobby "The Chief" Taylor, the former backup goalie for the Flyers' famed Broad Street Bullies back in the 70's. He's been doing color commentary for the Lightning telecasts for many years and always has a smile on his face and lots of interesting tales to tell, some of which will never make it to TV! 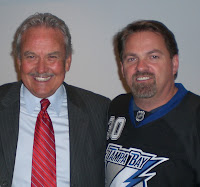 I was wondering why he was still talking to us when the second period started, and he said that he wasn't working this game, as Sun Sports wasn't carrying it, he was just along for the ride. Now that's dedication, or did he just mix up his dates and think he was supposed to work? After all, he was wearing his suit! Just kidding, Chief!

Lightning defenseman Dan Boyle, who was injured in preseason when a skate fell from his locker and the blade sliced open the tendons in his wrist, also attended the game, with his arm heavily wrapped. He had tried to return from his injury for a few games, but his mobility was limited and had to have a second surgery. I hope he recovers fully before he returns, but we miss him on the ice.

I said goodbye to Heather at the airport on Sunday morning and fell asleep before my Colorado-bound plane even took off, not waking up until I felt the wheels touch the tarmac in Denver!
Posted by Steve Williamson at 10:09 AM