Make That A Cold Night In Dallas Instead

Have you heard the one about the guy who asks if you have an extra ticket so that he can get his son into the game with him 'cause the kid lost his ticket? If you look in "The Scalpers Handbook", it's right there in Chapter One and is the oldest trick in the book. The guy always says, "Don't worry if you don't see me inside as I'll be sitting next to my son in the upper deck, I just need one ticket to get in the building."

I met a lovely couple in Dallas, but they obviously hadn't read the book. I was walking up to the arena when this man asked me if I needed a ticket. To make a long story short, I bought a nice $150 ticket from him for $40 and strolled through the turnstile (and the metal detector).

When I got to my seat, it was occupied and the indignant couple couldn't understand how I had this ticket, because they'd given it to a nice man outside who needed an extra to get his kid into the game. They obviously hadn't heard the one about the guy and the kid who....blah blah. After their initial anger, they turned out to be great company, knew their hockey, and we had a lovely time trading stories all night long.

Which was good, because if we had to rely on watching the Dallas Stars for entertainment, we'd have been in trouble. The team is old and cold and were drubbed 5-0 by the Phoenix Coyotes, behind Mikael Tellqvist's strong performance in the net. Speaking of nets, the American Airlines Center is the third arena I've seen (with L.A. and N.J.) that uses white netting to protect the fans from errant pucks. Having often sat behind the goal, I never understood why most teams use black nets, which ruin your view of the ice. 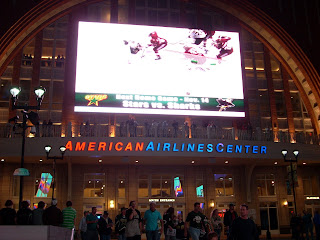 The Dallas crowd was the best dressed group I've seen. Women in teased hair and high heels, men with Hugo Boss jackets or (but not and) bolo ties, they all looked good. It took me back to the days when everyone dressed to go to a sporting event. Have you seen pictures of a hockey game from the fifties? Without fail, everyone is wearing a suit and tie. The building reminded me of a lobby of an upscale hotel, with crown moulding, and muted tones, and the concourse was rectangular, not oval as most are. As a aviation fan, I loved the section where they have large models of old American Airlines planes hanging from the ceiling.
They say everything is bigger in Texas and they were right about the hot dogs. It was called "The Knife & Fork Dog" and they weren't kidding. A foot long packed with chili, cheese onions and a touch of BBQ sauce gets my vote for best dog to date.
Sorry, I digress. Dallas wore their road whites for the game and Sergei Zubov cost his team the first goal by doing his best imitation of a pylon. The Coyotes forward skated right by him to negate an icing a call, and five seconds later the puck was in the net. The Stars are an old team. Modano didn't take a shot on goal all night, as he was trying so hard to get his record-tying assist. Line of the night....a flu bug has been affecting some of the Coyotes and as a Phoenix forward skated easily around Modano to score a shorthanded goal, a fan yells, "What's the matter Mike, are you afraid of catching a cold if you touch him!
This was my eighth game, and the first one in which the home team didn't get at least a point. Next stop Phoenix (I asked for a seat on the team charter back from Dallas, but no luck!) and then right after the game, off to Columbus on the redeye. The fans in Columbus have really been supportive and I'll be going to the RBar to meet some of them after the game, if I can stay awake. Maybe someone will buy me a Red Bull!
Posted by Steve Williamson at 10:09 AM

I dont like to be difficult...well i do really BUT are you not having time to update the schedule...so we know how you are getting from one place to the other......thought you said you'd have plenty of time on the road!!!!
Sound great fun...keep smiling

I was watching the Coyotes/Ducks game and I saw that they interviewed you (Todd Walsh-which he is a really cool guy). I think it is cool that you are doing this.

Hi I just saw you during the Phoenix game too:)
I live here but I'm a Detroit fan born and raised:) :)
I think your adventure sounds sooooo cool. tiring but cool:)
Sorry you had to suffer through the coyotes lol

have a great time.

So, you lied to get a cheap ticket to the game? Not cool. Brings bad karma.

"Women in teased hair and high heels, men with Hugo Boss jackets or (but not and) bolo ties, they all looked good."

See anyone wearing any Z. Cavariccis or a Members Only jacket? How about a jean jacket with a giant Motley Crue patch and a rockin' 80's mullet? Ah, the days when hockey was cool...

I agree with the other poster who said that lying to get a cheap ticket was not cool. Your trip sounds great and I looked forward to reading your descriptions of the various games and arenas - especially when you come to my hometown - Edmonton. But I have to say that my view of the whole thing is a bit tainted now. I'm pretty shocked that you would admit to doing that. Is that the kind of attitude you bring to your work promoting tourism in Florida? If I was your employer, I'd be a bit concerned about that.

Sorry about the previous post about how it was not cool to lie to get the cheap ticket. It was pointed out to me that I should have read your piece more carefully and if I had I would have realized that it was the scalper from whom you bought the ticket who lied and not you. Anyway, I'm enjoying reading your reports and am looking forward to your visit to Edmonton.