Off Nights All Around...

Hockey players have off nights, and after watching my beloved Lightning sleepwalk through three straight losses in which they were outscored 13-2 by the three NY area teams, I guess I'm entitled to one too. It's late, and I'm in need of sleep.

I trekked out to the Nassau Coliseum expecting a letdown after experiencing two glitzy arenas in Montreal and New Jersey. Traffic wasn't too bad and I arrived about 6pm. Parking was only $7, which is way cheaper than any other arena so far, so that put me in a cheery mood. And I got a front row spot about 30 yards from the front door. From a distance, the Coliseum resembles a UFO that has landed splat in the middle of suburbia. I felt like I had stepped into a time warp for the night. When I get to Big D. tomorrow, I'll explain what I mean, 'cause in a retro sort of way, I really enjoyed myself in the building.

The Lightning came out energized as Coach Tortorella (who my girlfriend Heather has a secret* crush on) put enforcers Andre Roy and Nick Tarnasky out for the opening faceoff, and they looked good until late in the first when Marc Denis let in what looked like a softie to me. And that's all the Isles needed as they cruised to a 4-0 victory. Former Lightning forward Rusty Fedotenko tallied for the Isles, and he seemed so excited in his intermission interview. Like most Lightning fans, I'll always love the guy who scored both goals in Game 7 of the 2004 Stanley Cup Finals, no matter where he plays.

I got a looney e-mail the other day from some conspiracy theorist claiming that I wasn't really going to any of these games, I was just Photoshopping myself into postcards of each arena. After looking at this picture from tonight's Islanders game, I can't argue with the dude! As soon as I get to Texas, I'm taking this camera back to Target and trading up for a better one. 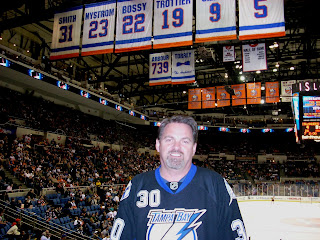 I have a 7.15am flight to Dallas as I begin my stretch of 22 flights in 23 days. Here's my schedule from now on....wake up while it's still dark, catch a plane, rent a car, beg the girl at the hotel desk to let me check in early, try to nap, write my blog, find a ticket for the game, head to the arena, sample hot dogs and a new brew, head back to the hotel, then wake up while it's still dark and do it all over again. Think of me as Bill Murray in Groundhog Day (but without the pockmarks on the cheeks).

*Not so secret any more!
Posted by Steve Williamson at 12:53 AM

I can assure everybody that these pictures aren't fake since I saw Steve at the Bell Center in Montreal on Tuesday. I also saw that weird gold-painted guy with a Stanley Cup replica.

Steve, you should have been to Montreal for yesterdays game against the Flyers. What a game we had ! If you think you had a blast in Montreal on Tuesday ... To me , Tuesday was the most boring game of the year so far ! GO HABS GO !

Steve, try staking a photo sitting in one of the seats with the rink behind you. It's harder to photoshop that!

Is there somewhere you've explained why you scheduled things the way you have? It seems a bit strange to me that you're crisscrossing the country rather than going from one arena to the next closest arena (I can understand throwing in the Tampa Bay games but not the rest) or are you just a masochist for air travel?

Take the picture without the flash, or with a background closer behind you. The flash is lighting you up but not the background. Makes you look like a cut-out.

I know Steve very well...and he really is doing this...because...he is mad.... he is a hockey fan...and likes flying in aeroplanes.....and its a great idea!

Doing a grand job...good luck the next three weeks will be tough...still love the blog

Just noticed you got a mention in the Yahoo Sports (AP) write up of the NYI/TB game last night.

"Lightning fan and Orlando resident Steve Williamson has embarked on a trip where he visits all 30 NHL arenas in 30 nights. Nassau Coliseum is the sixth on his list, which will end at the St. Pete Times Forum on Nov. 24."
Yahoo Sports Link

I saw him at the Nassau Veterans Memorial Colleseum. Isles win 4-0.

Have a great trip broda!!!