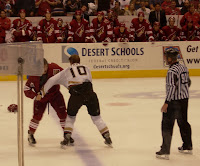 Instead of showing boring boxing bouts, HBO should have sent Larry Merchant out to Phoenix on Saturday night for some old time rock 'em sock 'em hockey as the Coyotes and Anaheim Ducks squared off at the Jobing.com Arena. With three fights, countless scrums, flying elbows and big hits all night, these teams clearly just don't like each other.
Coyotes rookie Daniel Carcillo was a one-man wrecking crew, taking on both Travis Moen and Corey Perry in the second period. His battle with Perry was the longest tussle I've seen in years, lasting what seemed like three minutes. The Carcillo kid is full of energy and I think the refs just wanted to let him get it out of his system. Oh, the Ducks won 5-2.

I had a slight delay at DFW airport security, as I had my liquids and gels in the wrong size clear plastic bag. This seemed to greatly perturb the TSA screener, who gave me a five minute lecture on the ins and out of bag sizes before she would give me a bag with the official approved correct dimensions to let me through. I though I was in the middle of a Saturday Night Live skit, but couldn't laugh out loud in case they threw me in the stockade! Have you ever seen an iPod vending machine like this one in the Dallas airport. You need a lot of quarters!

I arrived in Phoenix at lunchtime and hung around the airport for a couple of hours, returning some calls and updating the web site. You'll probably laugh at me for saying this, but until I read the newspaper, I didn't know the Coyotes were playing out in Glendale! I'm an East Coast boy and am not used to having more than one arena in a city. I've spent so much time booking hotels and flights that I haven't worried about where the arena is located and I might have ended up at the US Airways Center downtown for a tractor pull or something.

Doug and Paul from the Coyotes took great care of me at the game and I met lots of Phoenix fans who had heard about my trip. Larry and Heather from the Coyotes Booster Club even gave me a sweatshirt (handy when I go to Western Canada). The in-game host interviewed me on the big screen and asked me to howl like a coyote. That was not a pretty sound! 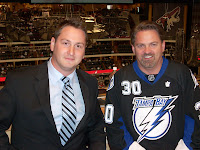 During the second intermission, they invited me up to the press box for a radio interview with Matt Rosen, and during the third period, Tom Walsh from the TV broadcast team stopped by my seat for an interview. It was such a busy night that when I went to the concession stand at the beginning of the third period to grab my customary hot dog and beer, they'd already unscrewed the keg handles and sold out of dogs! I settled for a Teriyaki Beef Bowl instead, which wasn't bad. The arena is located essentially in the middle of an outdoor mall, like Universal CityWalk for those of you who've been to Orlando or L.A., so there's plenty to do before or after the game.

I updated the schedule page and added a few more previews, as some of you were yearning for more. They may be short and sweet from this point, as my travel is picking up and I'm flying every day but one from now on.

I'm in Columbus now, after taking the Delta redeye through New York's JFK airport to get here. Next up, the Blue Jackets play the Blues at 5pm, and I'm off to load up on some famous Cincinnati-style Skyline Chili before the game.
Posted by Steve Williamson at 11:07 AM

Sorry we missed you at the game. It's too bad we couldn't get the home team to win.

Hopefully you will give us luck during the return trip to Anaheim! :-D