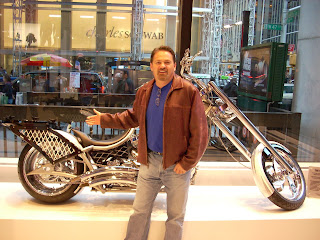 There's no crowd like a Madison Square Garden crowd. They were even loud during the warmups! I've seen more than a hundred games in New York, mostly back in the 70's, and it's a unigue experience.

I never did get to take a nap in the afternoon, and headed into the city where I was meeting Schuyler, one of the NHL's PR execs, at the NHL store at 47th and 6th. It was chock full of jerseys and other neat items, highlighted by a custom bike built by West Coast Choppers. On the back is a mount designed to hold the Stanley Cup!

We then went upstairs to the NHL offices, and he gave me a peek at their control center where they watch all the games. We then headed down to the Garden, where we were joined by my brother Pete. Last time Pete and I watched a game together there was Game 7 of the 1994 Stanley Cup Finals, then we paraded down Broadway with thousands of joyous Ranger fans to toast the victory.

Since then my allegiances have shifted, living in Florida for so long, and I was openly rooting for the Lightning last night. So I was disappointed with the result. I thought Holmqvist made some incredible saves, but the Rangers were the better team. The highlight was Vinny Lecavalier's penalty shot goal. It's been a loooong time since I remember Tampa scoring on a penalty shot, despite their stellar shootout record.

Wearing my Tampa Bay Lightning jersey, I heard a full range of insults, such as "Go back to Florida, you pussy", "We'll kick your ass all the way back to the beach", and four young guys who were cracking themselves up by yelling, "Tampa Gay Lightning". Only in New York!

More later, but I'd better get on the road for the six hour drive to Montreal....

Posted by Steve Williamson at 9:01 AM

I knew you had to be a Tampa Bay fan. Out of 30 games, you made sure that 8 of them included the Lightning? Well, have a nice drive. I'm watching the Montreal game right now and am hoping you're having a blast.

Just to let you know, the chopper at the NHL store was made by Orange County Choppers in Montgomery, NY.