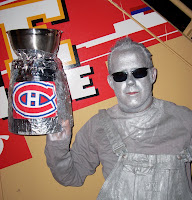 I know I was gushing like an 8th grade schoolgirl last night, but I wish I could have arranged for Montreal to be near the end of my 30 Games, because I'll be hard-pressed to have a better all-around hockey experience. From start to finish, it was a great night, even though the home team lost. For the record, the Atlanta Thrashers beat the Canadiens 3-2 in a shootout (my non-hockey fan readers reminded me to put the score of each game here so they know who won). The reality is the Habs were lucky to walk away with a point. They only had two shots on goal, and one of them was a just dump-in from center ice that was on net. The fans were all dressed in rouge, blanc et bleu, except one guy here in silver!

Henri Richard was there to honor three Montreal players who has just played their 1,000th NHL game, Alexei Kovalev, Bryan Smolinski and Roman Hamrlik. I was at Hamrlik's first game back in 1992, and seen him grow from a gawky 18 year old into a solid number 2/3 D-Man. The Bell Centre is right in the middle of a vibrant area of the city, and I sampled some of the nightlife after the game, which explains why I am still writing at 10.30 when I should be on the road to Jersey already.

I stayed in the Novotel hotel, which is located directly across the street from the arena. I booked the hotel through Hotwire, which is a great way to save money. The only catch is you don't know which hotel you are going to stay until after you've paid for it (and there's no backing out). You simply select the number of stars you want (not less than three stars for me), and the part of town (downtown) you want to stay in. Hotwire gives you a price ($69 & tax) then you press book and Voila, the name of your hotel shows up. It's a bit like playing the lottery, sometimes you lose (a crappy hotel not so close to where you want to be) but I hit the jackpot with this one. With Hotwire you can often save 50%-60% on hotels and I use them often.

A couple of other neat things....the Jumbotron counts down the last five seconds of penalties and the crowd counts down in French, and I heard Cab Calloway's Hi-De-Ho song for the first time since hearing it at Expo Hall during the Lightning's inaugural season.

Headed back down to Jersey now, and I hope the U.S. Customs person at the border doesn't give me strange looks like the Canadian lady did yesterday, as I explained why I was going to 30 Games In 30 Nights. She was punching away on her computer for a while, so perhaps I'm on some double secret bad boy list now!
Posted by Steve Williamson at 10:00 AM

Loving the site and these pics.

terrible game to watch the habs, they played bad. But you got to see a nice little ceremony and Carey Price's home opener

Hey, Steve, I saw you at the game last night. I work in the main teamstore in section 121, and had told a couple of people to watch out for a guy in a Lightning jersey with the 30 games thing on the back. I saw your post on HF, so figured I'd keep an eye out.

Glad you had a good time, but it's unfortunate that Montreal played a poor game. The crowd is normally way louder than they were on Tuesday night. Hopefully, someday, you can make it back up here for a game when le tricolore play to their potential.

Take care, good luck, and most importantly, have fun!