How Fitting....Devils Dominate on Halloween 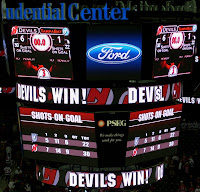 New Jersey had a special offer for college students at last night's game on Halloween - wear a costume and you got in for ten bucks. It looked like 20 guys from Montclair State took advantage of the deal, crashed the locker room and dressed up as the Tampa Bay Lightning!

You know I'm a Lightning fan, but this was a poor performance all around. The Devils beat us 6-1, deservedly so, and that's all I need to say about the game. Congrats to Devil Jay Pandolfo on his first career hat trick, although his last goal was on a deflection, and he was only credited with it after the game, so no one threw their hats onto the ice in celebration, poor guy.

It was "Swedish Fish" night and we all received Swedish Fish candy (those little red gummy fish) as we left the arena. Unfortunately, we brought our own Swedish Fish with us, as Lightning goalie Johan Holmqvist spent much of the game flopping around on the ice, and this Yahoo picture needs no caption, just look at the dasher board ad!

This was only the second game in the new Prudential Center, "The Rock". It only holds 17,625 fans, but feels bigger. The building has all the modern amenities and a vast range of concessions, ranging from Italian Sausage to Sushi. I selected Rolling Rock as my brew for the night, as it's now brewed in Newark, instead of Latrobe, PA, (much to the chagrin of many beer aficionados) but it still tasted pretty good to me.

The big story for me was the fans, or lack of them. The announced attendance was 13,218, but I'd say half of them dressed as empty seats for Halloween! The combination of trick or treating and the NJ Nets home opener kept the crowd low, which is a shame, as it is a great place to watch hockey. It's bright, open, and a hockey jersey from every college and high school in the state hangs around the concourse, which is a unique touch.

On that subject, as a collector of game worn hockey jerseys, I was impressed by the jerseys on display that chronicled the history of the Devils, and I'll be adding some pictures of them shortly.

I met plenty of friendly Devils fans who had heard about my trip, and even the ones who didn't appreciate me wearing my jersey had no insults more original than "Lightning Sucks".

It's been six games now and I'm feeling pretty good, My diet of fruit for breakfast, vitamins for lunch and hot dogs for dinner seems to be working just fine! Starting tomorrow, I'll be on a plane for 22 of the next 23 days, so we'll see how well my body holds up then. I'll be adding a morning dose of "Airborne" before each flight to keep those germies away!

Tonight I'm off to the Nassau Veterans War Memorial Coliseum (I think that's the correct name) to see if the Lightning can salvage a win and send me down to Dallas on Friday with a smile on my face!
Posted by Steve Williamson at 9:59 AM

One suggestion, could you included where you sit each game? I'd like to get different perpectives from the many different seats. You did this one game when you sat behind the press and i thought it was a nice touch.

also how are you getting the tickets? for free? from scalpers? online? etc.

"It's bright, open, and a hockey jersey from every college and high school in the state hangs around the concourse, which is a unique touch." --- They stoled this idea from the Minnesota Wild! Wait until you come to the Excel Energy Center and see the state of hockey jersey's. Almost all college and high school's jersey's hang in the concourse. There are North Star, St. Paul Saint's and other jersey's in display boxes on the main concourse. Plan to get to stadium early.

Islanders fan here, have fun tonight. I have a sinking feeling TB is going home with 2 pts. :(

Hope the trip has been going and stays well.

BTW There's no War in the name, it's just Nassau Veterans Memorial Coliseum.

Hmm, I've never seen the word "War" added to the Nassau Coliseum name. I think it's officially just Nassau Veterans Memorial Coliseum. Have fun tonight and be ready for NONE of the amenities at the new Devils' arena. Oh and another Lightning loss :)

alexrue is right, the Devs owner stated that he saw that at Minn. and loved it.

I went on opening night and thought is was a great rink. Missed yesterday but will be back tomorrow Vs Leafs

Good luck on your trip.

I am enjoying your witty observations and just hope you are still in good spirits despite three Lightning losses.

I would suggest that you don’t leave negative comments about the arenas you attend, from what I can tell you are a hockey lover & this adventure will also help promote hockey in the U.S.