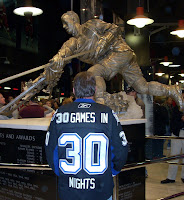 An optimist might generously describe Detroit's Joe Louis Arena as "functional". Similar to Philly's Wachovia Center, the drab arena is located in the middle of absoutely nothing, so there is no ambience outside. Once you enter the doors however, a giant statue of the legendary Gordie Howe glares down at you, the Hockeytown atmosphere permeates the concourse and you are awash in a sea of red and white. And tonight, pink. It was Breast Cancer Awareness Night so lots of fans traded their red duds in for pink. The Wings even used pink tape on their sticks during the warmups.

The game was wide open and entertaining with the Wings taking a 1-0 lead just one minute into the game. But you don't need me to give a play-by-play description, do you? To make a long story short, the Red Wings beat San Jose 5-1. The Detroit crowd was quieter than I expected, but after their third goal (or their third beer!) they loosened up and finally made some noise.

For some unknown reason, Wings enforcer Aaron Downey skated hard into the goal post on his first shift, kinda like a driver falling asleep at the wheel and running into a pole. Shook him up, but he came back to get his butt kicked in a fight with Rob Davison of San Jose a few minutes later.

Things you don't see on TV....Chris Chelios and Joe Thornton were going at each other all night behind the play. Slashing, cross-checking and so on. I guess the refs figured "boys will be boys" and let them hack away throught the game!

Best hit of the night was by Ryan Clowe of the Sharks. Only problem is he accidently hit his teammate Mike Grier, who hobbled back to the bench looking not too happy.

Funniest moment of the night....On the Jumbotron, they were showing a lady who had just won a Red Wings jersey in a drawing. She wasn't the slimmest of ladies, and was jiggling around with excitement in her tight pink outfit, at which point the guy behind me yells, "Hurry up honey, and put the jersey on"! O.K., you probably had to be there, huh?

Quite a few people came up to me and asked about my trip. How did they recognize me, you may ask? Simple, I was wearing a jersey that says "30 Games In 30 Nights" on the back. You'll see pictures soon, I promise.

Getting back to the building, I know why the line for the men's room was so long (those gruesome '70's troughs), but why were 20 people in line for Dippin' Dots ice cream? Has it just arrived in Detroit?

Props to the stadium deejay for playing "Roll Out The Barrel", which sounded less out of place at a hockey game than you would think.

The best concession stand - Chelie's Chili. Not only does Chris Chelios play 20 minutes a night on defense, but he even finds time to cook up a batch of tasty chili between periods!

Here's a request. I love the hockey and the sports talk, but since you're going to experience 30 different cities, please update me on the different types of brew and food.

Rank the rinks for beer and muchies.

This is fun to read

Cool Shirt! Where did you get it made and where's the link to buy one?

I'm surprised - I never see anyone buying Dippin Dots at Joe Louis Arena or even during the summer at Comerica Park during Tigers games. I tried it once, tasted fine, but it's $5 i'll never get to spend on pizza.